In this notebook you will learn the basic principles of reinforcment learning and see how it differs from supervised learning. Classicle supervised learning is purely based on learning a certain task like classification or regression given a set of training variables, features and labels. So while training you already know what to aim for. Reinforcment learning on the other hand is more "learning by doing". So at start you do not know what to aim for but instead you learn based on an action reward system. Each action you perform gives back a reward and your task is it to maximize the reward over time.

A quite good and easy to understand task to understand this interplay bewteen action and reward is to learn how to play bandit machines or a multi armend bandit machine. Each arm represents a distribution of rewards and your task will it be to learn which arm to choose in order to maximize the reward over many tries.

To solve this notebook read SUT18 until chapter 2.4. SUT18 is the standard literature for reinforcment learning and the basis for this and following notebooks.

The following exercises are based on chapter 2.3 and 2.4 in [SUT18]. Although the problem to be solved is way older. In general, it is about using ressources to either:

Imagine you are in a casino seeing ten one armed bandits in front of you.

You have a limited number of trials (e.g. 1.000) and at the beginning the only thing you know, is that each bandit gives another reward. The reward might be normally distributed, like in the picture below: 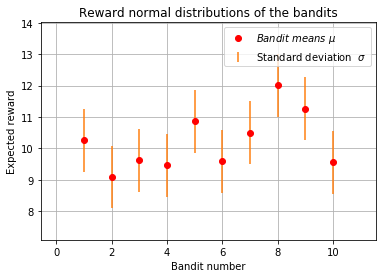 Before we start to solve our objective, we first need to create some bandits.

On each of an infinite sequence of time steps, $ t=1,2,3,… $, you choose an action $ A_t $ from $ k $ possibilities, and receive a real-valued reward $ R_t $ The reward depends only on the action taken; it is indentically and independently distributed (i.i.d.)

These values (true values) are unknown. The distribution is unknown.

Nevertheless, you must maximize your total reward.

You must both try actions to learn their values (explore), and prefer those that appear best (exploit)

Define the greedy action at time $ t $ as

You can’t do both, but you need to do both

You can never stop exploring, but maybe you should explore less with time. Or maybe not.

Methods that learn Action-Value estimates and nothing else.

The sample-average estimates converge to true values. If the action is taken an infinite number of times

This would require us to store all rewards. To save memory, we can calculate the so called running average, only storing the latest$ Q_{n_a}(a) $ and$ n_a $:

In $ \epsilon $ -greedy, you are usually greedy, but with probability $ \epsilon $ you instead pick an action at random (also possibly the greedy action again).

This is perhaps the simplest way to balance exploration and exploitation

Implement the action-value method with the incremental implementation,$ \epsilon $-greedy algorithm, for the 10 armend bandit problem.

a) implement the update rule for the action-values Q, update_Qs(action, reward, Qs, Ns)

c) to "analyze" your algorithm perform multiple runs, always using a new 10 armed bandit, and calculate the average reward and percentage of optimal choices for each step over these multiple runs, visualize your results for different$ \epsilon $ values. Your plots should look like the following: 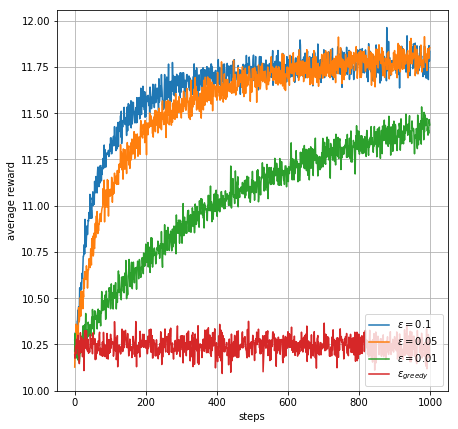 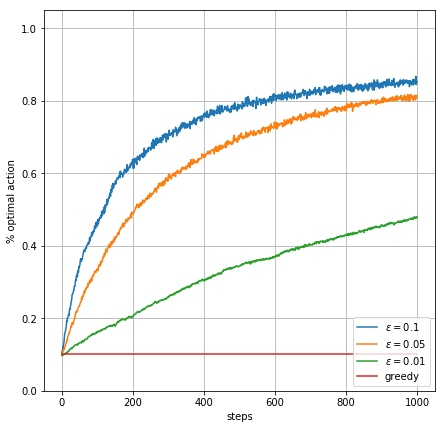 Another approach to solve the Bandit problem is the Gradient Bandit Algorithm presented in chapter 2.8 [SUT18]

These$ H_t(a) $ are then used to computed the probabilities which action (bandit)$ A_t $ to chose at current time step$ t $, with the softmax function:

and all other actions$ a $ we did not chose with:

Implement the Gradient Bandit Algorithm for the 10 armend bandit problem. The steps taken here are fairly equivalent to task 2. 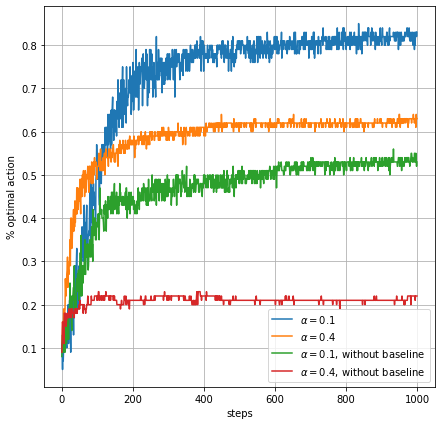 Tip: for the last part use at least 100 runs for nicely shaped plots

The following license applies to the complete notebook, including code cells. It does however not apply to any referenced external media (e.g., images).

is licensed under a Creative Commons Attribution-ShareAlike 4.0 International License.
Based on a work at https://gitlab.com/deep.TEACHING.

The following license only applies to code cells of the notebook.

Permission is hereby granted, free of charge, to any person obtaining a copy of this software and associated documentation files (the "Software"), to deal in the Software without restriction, including without limitation the rights to use, copy, modify, merge, publish, distribute, sublicense, and/or sell copies of the Software, and to permit persons to whom the Software is furnished to do so, subject to the following conditions:

The above copyright notice and this permission notice shall be included in all copies or substantial portions of the Software.

THE SOFTWARE IS PROVIDED "AS IS", WITHOUT WARRANTY OF ANY KIND, EXPRESS OR IMPLIED, INCLUDING BUT NOT LIMITED TO THE WARRANTIES OF MERCHANTABILITY, FITNESS FOR A PARTICULAR PURPOSE AND NONINFRINGEMENT. IN NO EVENT SHALL THE AUTHORS OR COPYRIGHT HOLDERS BE LIABLE FOR ANY CLAIM, DAMAGES OR OTHER LIABILITY, WHETHER IN AN ACTION OF CONTRACT, TORT OR OTHERWISE, ARISING FROM, OUT OF OR IN CONNECTION WITH THE SOFTWARE OR THE USE OR OTHER DEALINGS IN THE SOFTWARE.